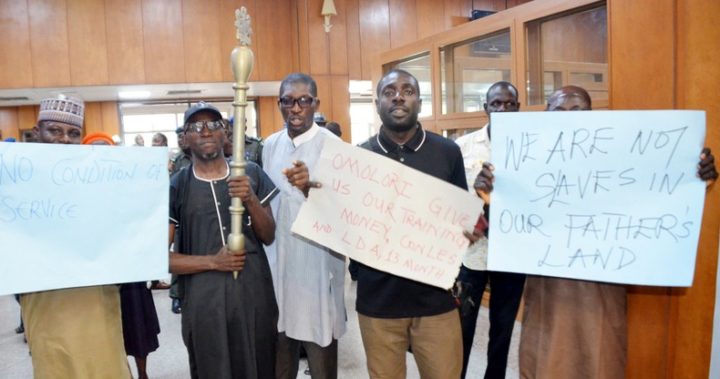 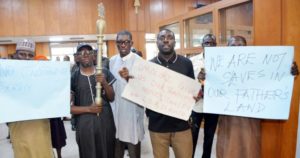 Nigeria’s ruling party, APC, has blamed Senate President Bukola Saraki and Speaker of the House of Representatives, Yakubu Dogara, for the protest by workers of the National Assembly.

The workers commenced a four-day strike on Monday to demand payment of their due allowances, deserved promotion among other issues.

On Monday, they prevented lawmakers and other persons from entering the assembly complex.

The Clerk of the National Assembly, Sanni Omolori, has largely blamed non-release of funds by the federal government for not being able to pay the workers their dues.

In a statement by its spokesperson, Lanre Issa-Onilu, on Tuesday, the APC ignored the alleged non-release of the relevant funds by the APC-led federal government, but instead blamed the assembly leadership whose members defected to the main opposition party, PDP.

“The APC calls on the Senate President, Senator Bukola Saraki and the Speaker of the House of Representatives, Yakubu Dogara, to do the needful by attending to the demands of the parliamentary workers.

Mr Issa-Onilu described the protest as a shameful development and a reminder of what, he said, Nigerians witnessed under the Peoples Democratic Party (PDP) administration.

“The PDP’s 16-year rule was characterised by such incidences of unpaid salaries, ghost workers and a shocking disdain for workers’ welfare.

“While the minority PDP usurpers who parade themselves as the National Assembly leadership have promptly paid themselves their allowances, National Assembly workers, under the umbrella of Parliamentary Staff Association of Nigeria (PASAN), are owed their duly earned 28 per cent increase in their salaries since 2010,” he said.

He said perhaps, if the National Assembly leaders had focused on their core legislative business and operations rather than resort to “subterfuge” with the sole intent of undermining the APC government, the welfare of parliamentary workers would not have been taken for granted.

The party said the welfare of workers is a cardinal policy of the APC administration and called on the PDP led National Assembly to save the country “this national embarrassment.”

According to a statement signed by the Mr Omolori, the directive was passed after a meeting of the joint leadership of the two chambers with the management and representatives of the security agencies.

The meeting was called by the political leadership to listen to the management on efforts made so far, to address the grievances of the striking staff.